How You Can Buy Bitcoin SV in the UK

Bitcoin SV (BSV or also: BCHSV) is a cryptocurrency created from a fork ("hard fork") from the Bitcoin Cash blockchain in November 2018. Here you can find out how and where to buy Bitcoin SV!

You can also find out important information about the coin and which exchanges there are and whether you can also get BCHSV coins with PayPal, SOFORT transfer and the like.

Buy Bitcoin SV: What to look out for

Since Bitcoin SV itself wants to go back to the vision of the Bitcoin founder and thus save from the hash war, there are also some differences when buying. Above all, one should pay attention to the following factors:

Where to buy Bitcoin SV? Our broker and exchange comparison:

Since you have decided to buy Bitcoin SV, we will now show you in detail how to buy Bitcoin SV. We use the broker Libertex for this, as it stands out in terms of customer support, security and price. There are also hardly any brokers where you can invest in Bitcoin SV without detours.

First step: registering with a broker

The first step is to register with a broker.

At Libertex, you can also choose from a wide range of payment options. For example, bank transfer, Skrill, Sofortüberweisung, Neteller, Rapid, and also with credit card. Of course, the deposit at our test winner costs nothing.

After we have registered, we go directly to the trading menu. Here we are automatically credited with a demo balance of 50.000€.

First we click on the link to the Libertex registration form:

To the Libertex registration form

To buy Bitcoin SV you only have to deposit money. To do this, click on the green "Deposit" button at the top right.

After you have clicked on the button, a menu will open. Here you can choose the payment method and the amount you want to pay.

In our example we show the purchase with credit card. Libertex also offers other ways to make a deposit:

Now that we have topped up our account, we can start with the actual purchase of Bitcoin SV. To do this, we click in the search field at the top and enter "Bitcoin SV" there.

Now we select "BSVUSD". On the blue button "Open trading position" we now get to the buy menu.

After you have clicked on the button, the various purchase options will open.

To the Libertex registration

Buy Bitcoin SV or not?

Buy Bitcoin SV or rather: Hands off? After the recent rifts within the Bitcoin Cash community, the cryptocurrencies that emerged from it have both been weakened for the time being. Bitcoin has lost the hash war, according to several cryptocurrency news reports.

Everyone can figure out for themselves what the effect on investor confidence will be. Especially since Craig Wright, the person associated with Bitcoin SV, regularly gives reason to frown: Where does a person get the idea to call himself Satoshi Nakamoto? Is it wise to invest money in a project run by someone like that?

It also needs to be asked who benefits from Bitcoin SV: Does it serve users better than Bitcoin, or does it mainly serve the interests of miners? In any case, Bitcoin Cash was founded by a group of Bitcoin miners, developers, investors and Bitcoin users.

Bitcoin SV (BSV or BCHSV) is a cryptocurrency that emerged from a hard fork of the Bitcoin Cash blockchain in November 2018. It emerged from a dispute between Roger Ver and Dr. Craig Wright, who has claimed for years to be the originator of Bitcoin and is known in the scene by the nickname "Fake Satoshi" because of it. The dispute went down in the crypto history books as the "Hash War". The letters S and V stand for "Satoshi Version". While the block size for Bitcoin is fixed at 1MB, both Bitcoin SV and Bitcoin Cash offer significantly larger blocks and are therefore more scalable.

How exactly the "hash war" came about, what the difference is between Bitcoin Cash and Bitcoin SV and what Craig Wright means when he says Bitcoin SV is "the real Bitcoin": You can find out all this and more in our overview piece on Bitcoin SV.

Bitcoin SV has now also emerged from this group. The interest in higher short-term income on the part of the miners is obvious. What does this mean for the stability of the cryptocurrency in the long term? Will Bitcoin SV finally settle down, or will the next internal dispute soon be upon us? All this is difficult to answer.

Bitcoin SV is otherwise a pure means of payment, just like Bitcoin, and as such must prove itself in the long term against a number of strong competitors. A longer-term investment could be worthwhile if the market as a whole stabilises again and gains new momentum. BSV and BCHSV would probably benefit from this.

What are the fees when buying Bitcoin SV?

We would like to buy Bitcoin SV worth €1,000.
We would like to hold the BSV for a month and then withdraw it back to our account in euros
For simplicity, we assume that the exchange rate does not change

With these assumptions, we now go through the fees of the biggest providers:

Bitcoin SV Wallets: Which wallets are useful for storage after purchase?

Is a wallet necessary for trading Bitcoin SV? Not necessarily: In theory, you can just leave your BSV (or BCHSV) on the exchanges. On other exchanges like CEX, you can only buy Bitcoin SV if you have a Bitcoin SV wallet.

Basically, it's always a good idea to get a matching wallet for your investment. If you rely on the exchanges, you accept a certain risk: If an exchange unexpectedly goes bankrupt, you may lose your cryptocurrency. A list of all available wallets that support BSV/BCHSV can be found on the project homepage. 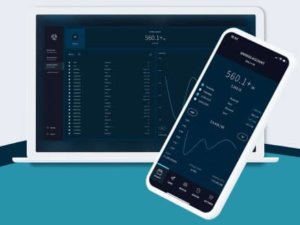 The cryptocurrency has already had some highs and lows. We show the most important milestones in the history of Bitcoin SV.

Alternatives to Bitcoin SV: buy other cryptocurrencies or shares.

That Bitcoin SV is the true Bitcoin is aggressively communicated by Craig Wright. The "hash war" he unleashed was perhaps the most talked about event in the cryptocurrency market in 2018. Having lost the hash war, it is questionable whether the BTC fork will succeed in attracting supporters to its side in the future. In our opinion, the future is more likely with other cryptocurrencies. But as always, we can't predict the future either. Nevertheless, we show you a few good alternatives from our point of view.

Alternative 1: Opportunities in the field of cryptocurrencies

Apart from that, there are also other cryptocurrencies that definitely have potential:

Buy Ethereum: Ethereum quasi the "big brother" of Bitcoin SV. As the number 2 cryptocurrency with a market capitalisation of an incredible 40 million euros, Ethereum is probably worth taking a risk on. If you're interested, just click here.
Buy Bitcoin: The top dog among cryptocurrencies is considered by many to be the "digital gold" and one of the most stable cryptos in terms of value.

Another alternative is crypto stocks: chip manufacturers, mining companies and even the Bitcoin Group have been able to post strong profits so far.

How can I invest in Bitcoin SV?

Can I buy Bitcoin SV with a credit card?

Buying Bitcoin SV with a credit card is not possible on any of the crypto exchanges we recommend.

However, you can buy Bitcoin SV with a credit card in a roundabout way by first buying Bitcoin and then exchanging it for BSV. You can find out how to do this in our instructions at the top of this page.

Is it possible to trade Bitcoin SV with Paypal?

Unfortunately, buying Bitcoin SV with Paypal is not possible on any of the exchanges we use.

Will Bitcoin SV continue to increase in value?

Bitcoin SV is expected to benefit when the market as a whole starts to grow again. Whether and when this will happen, however, is not certain.

Do I need a Bitcoin SV wallet?

Not mandatory, but we recommend it. However, some crypto exchanges also require it.

A wallet also protects you from eventualities such as the unexpected insolvency of your exchange platform. Without a wallet, you can hold Bitcoin SV on Binance and Kraken, for example.

Can I use my Bitcoin Wallet?

It depends on whether your wallet also supports the cryptocurrency Bitcoin SV. If in doubt, it is advisable to ask the provider directly. However, most wallets now support several coins.

What is the best way to invest in Bitcoin SV?

We recommend Binance for buying Bitcoin SV. Here you can only exchange Bitcoin SV for Bitcoin (or Ethereum or Litecoin) and not buy it for real money. But you don't have to go through the hassle of verifying your identity. If you want to buy Bitcoin SV with real money, we recommend the crypto exchange Kraken.

Hi, my name is Benzion. I have twelve years of experience in the Forex industry, and I have launched two successful crypto trading services. I have in-depth experience on several blockchain networks like Bitcoin, Etheruem, EOS, Cardano, Hyperledger, ICON, Komado, etc. I also have in-depth knowledge of blockchain techniques, including various consensus mechanisms, DLT, smart contracts, security, and privacy measures. Benzion Friedman